It's your move: Lucy

We’ve spoken to students across the country who made the move to iQ. Here, we meet Lucy, who is living at iQ Leeds while studying Fashion Design at the University of Leeds.

What did you do in your spare time at university?

In my spare time I take part in societies from the surf society to the trampoline society. I was also SocSoc’s (Sociology and Social Policy Society) graphic designer, for which my role was to design the logos, party invites and advertising.

I also worked part time in the city centre as a waitress one year, and then as a bartender in a cocktail bar. I love being behind the bar as it can be as much fun as a night out without the hangover. I’m a busy body so if I’m not working or doing university work, I often go to the gym to work out in a variety of ways from swimming to rock climbing to fitness classes, which are all offered in Leeds.

What did you discover in Leeds?

I discovered a great deal, from countryside treats like Roundhay Park – the largest inner city park in Europe, I believe – to Golden Acre Park and the more local Woodhouse Ridge, known as Hyde Park locally. These were beautiful countryside treats tucked inside the bustling city of Leeds.

Within the city, I loved having Leeds Trinity on my doorstep with the food hall with amazing meals and shops on offer, and the cute, quaint little shops surrounding the shopping centre. I was able to make friends through my work as a waitress at The Queens Hotel and being a bartender at The Liquorist on Greek Street, a well-known cocktail street in Leeds. These jobs showed me the good locations for food and drink as a student and where the perfect places to go are for a celebration drinks night out with my coursemates.

What were you proud of achieving at university so far?

I’m proud of being able to be independent and responsible but also make friends and memories while having fun. I found out in my first year at university that I was dyslexic which came a mix of a shock and a relief, so being accepted into a university which is part of the Russell Group and prides itself on research and written work felt like a big achievement – and I’d only been there a few weeks at this point.

However, the thing that stands out to me as being the most prominent achievement is being student rep for my first two years. I was able to meet people in other subjects within my school and to meet those in the years above, as well as improve the life of students on my course. One of the major changes I was able to get implemented was more seating areas to work on my coursework, as libraries were sceptical of glue sticks and paints.

What are you planning to do after university?

I am thinking of having my own company after university, ideally as my full-time job, but until then I am aiming to design for other companies until the business takes off. I haven’t ruled out getting a PGCE to teach in a college or school. I know that whatever route I take I want it to be creative as that is where my passion is. Besides my career I am looking at working in Australia for a year or two as it’s a country I’ve always wanted to visit and explore.

What’s important to you?

Happiness and manners are probably my two biggest values. If you value these then you tend to have a more positive impact on those around you and happiness spreads. I love the sentiment that a smile could make someone’s day and so I feel a smile really can change someone’s day. Manners cost nothing but they mean everything and I think it’s the same with a smile, it’s the difference a small action can make for the better. If that’s all I manage to do in a day then it’s been a good day.

One of my biggest causes which I was lucky enough to raise around £500 for in summer 2016 is The Christie Charity which helps those who are diagnosed with cancer. They do research, care, and treatment. 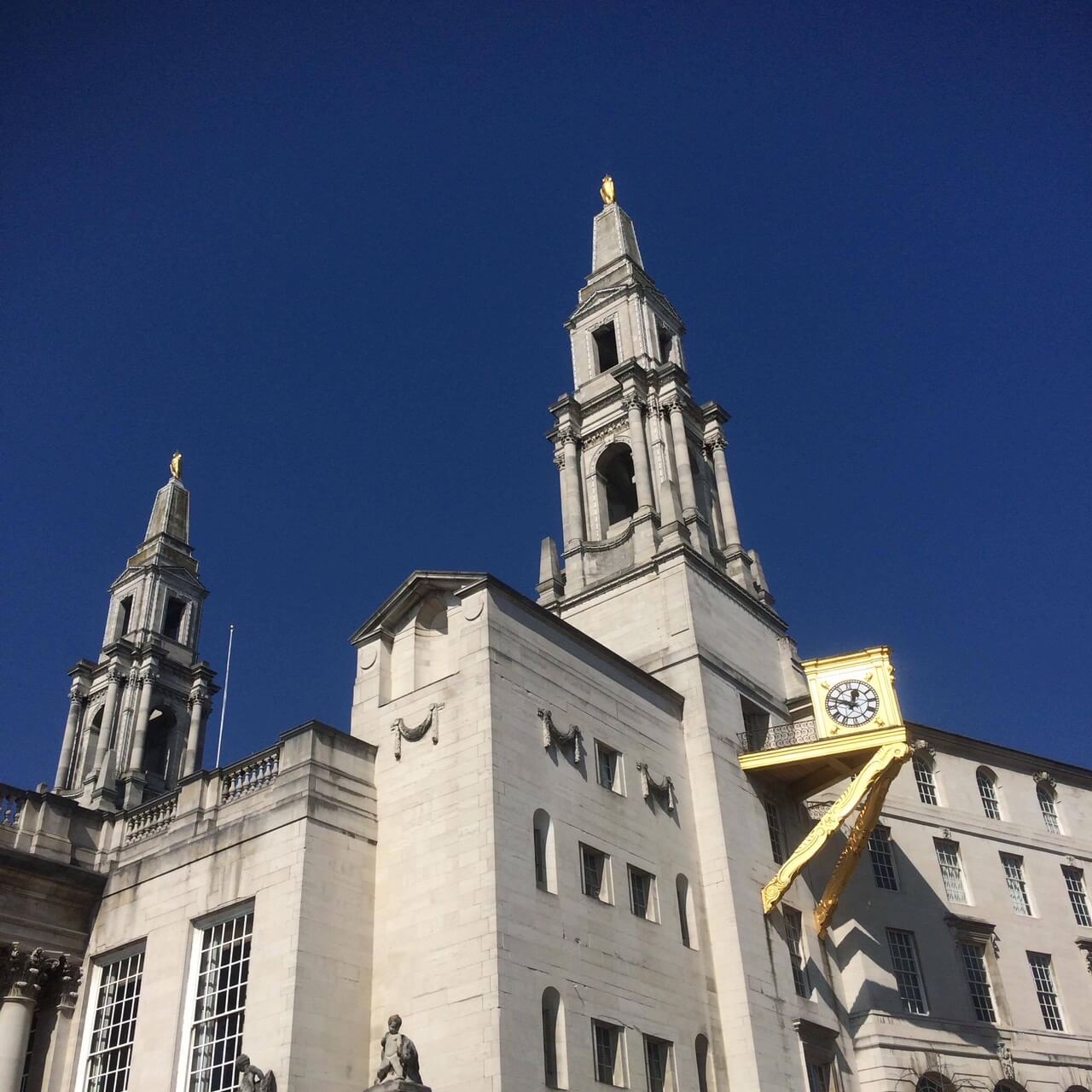 I absolutely love looking at architecture and feel incredibly inspired by it. Leeds is one of those cities that offers many wonderful buildings to look at and be inspired by and so it’s no wonder I took this photograph. The Civic Hall in the centre of Leeds on the Millennium Square is one of the more unusual, with golden details and owls found in surprising locations. This memory makes me happy because I had spent the day shopping with the girls in town and had gone for a coffee before heading home when I noticed this building along the way. 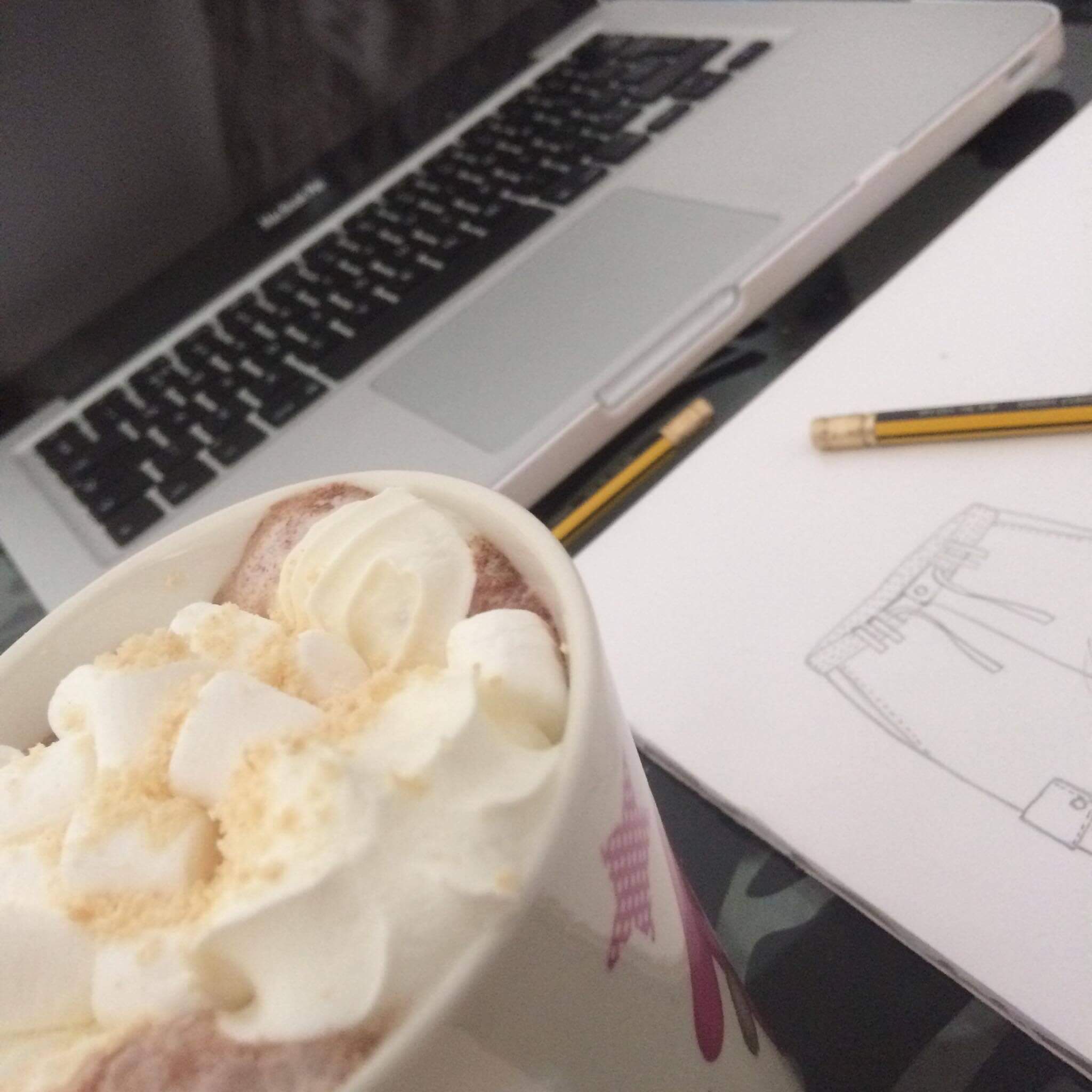 Hot chocolate became my go-to beverage to help make designing my work for university deadlines that little bit more fun. I love to create extravagant hot chocolate for a real treat, but the reason this one stands out for me, is because I was actually made this by my dad. My dad had found out about my love for fancy hot chocolates and surprised me with one while I was working away in my room. 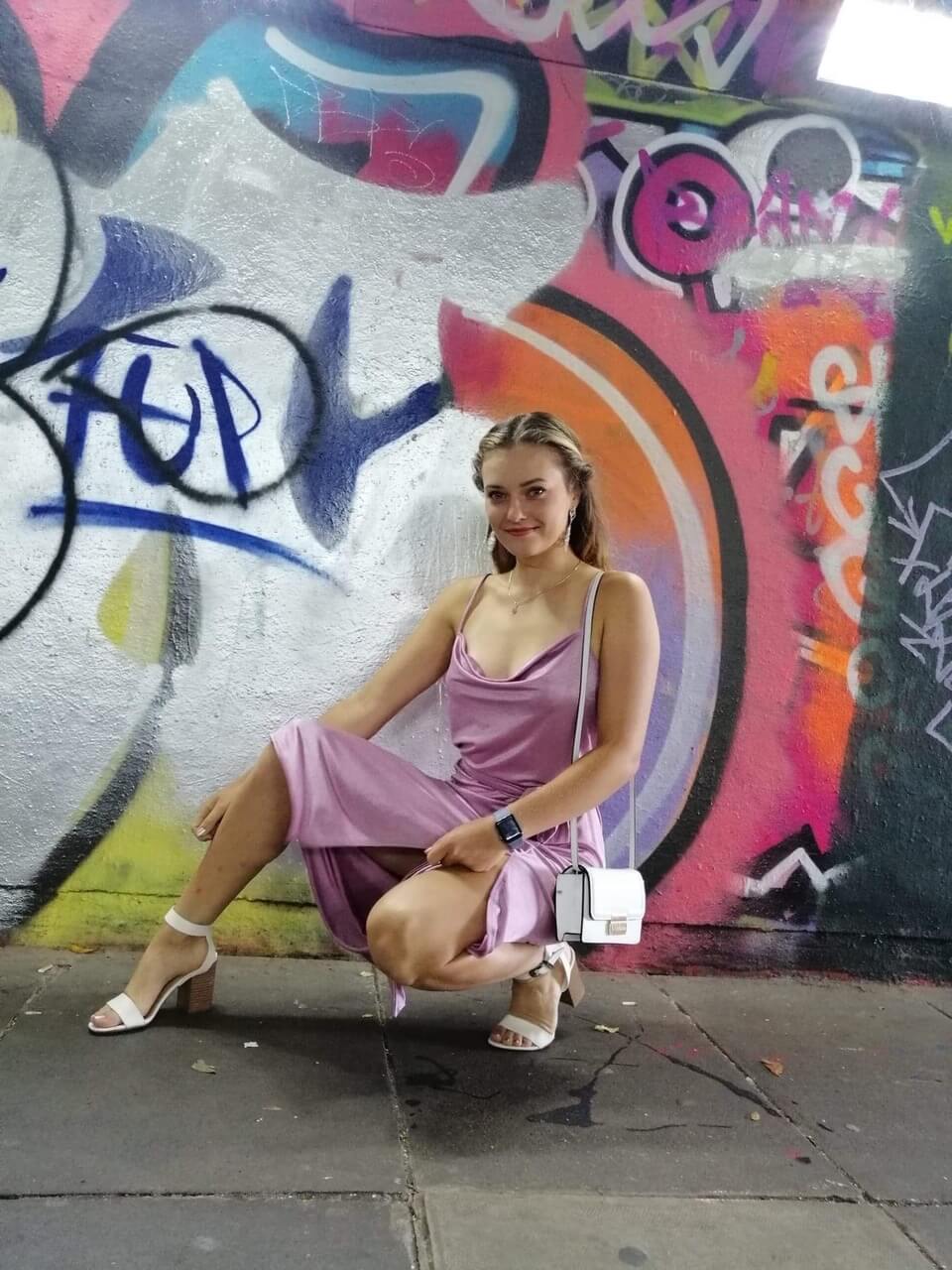 The graffiti wall caught my eye when we were on our way to an event. I loved the look of the wall and thought it went with my dress somehow, despite being all dressed up. I thought the combination of urban and glamour was amazing, so as a laugh I suggested a photograph. A little photo shoot occurred which was initially just for a laugh but it turned into a photograph that I absolutely love and have had as my profile picture as a result. The event was set off to a good start with high spirits from this photoshoot and it turned into an absolutely fantastic day. This image gives me fond memories of the whole day and the surprise find of this graffiti wall. 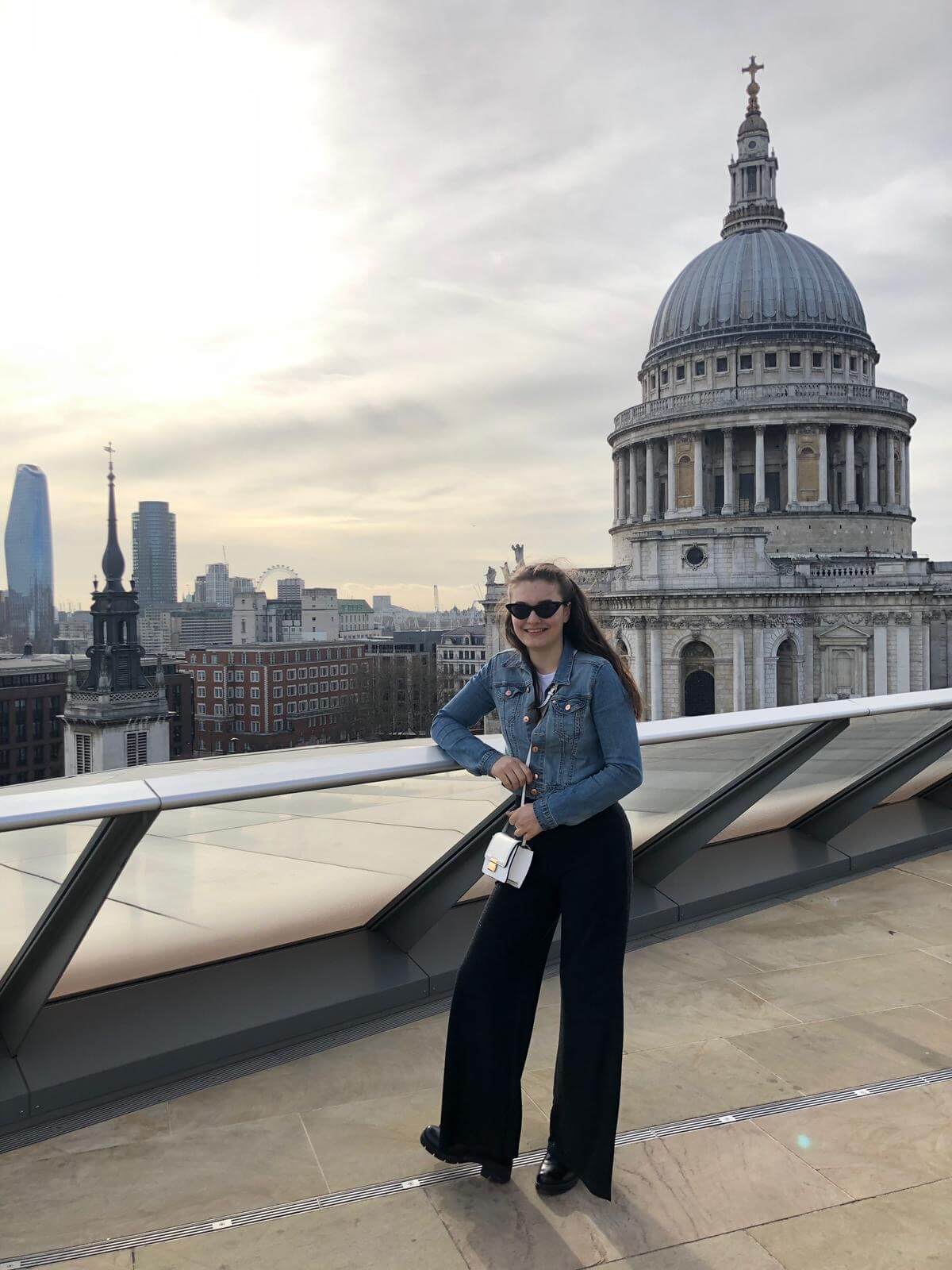 Whilst on placement in London I was fortunate enough to explore the city from going to see St. Paul’s Cathedral and museums to adventuring through Hyde Park or a surprise day out in Kew Gardens. The reason it was a surprise is because I initially had no official plans – that was until my boyfriend surprised me by flying to London from Switzerland, where he was also on placement, to see me. We decided that since the weather was nice, and we had both wanted to go, we would visit Kew Gardens together. I absolutely love plants and cactuses and so Kew was a little slice of heaven and it was made even more special by spending it with my boyfriend.

Why did you choose iQ?

Initially, the draws to iQ besides the obviously good locations was the onsite team – and by that I mean maintenance. After a year with a landlord who refused to fix the boiler for four months through the dead of winter and having to shower at friends’ houses, I decided that I wanted more security and reliability. After looking at several private accommodations, iQ made sense. They offered onsite maintenance, 24-hour security, amazing facilities and modern interiors along with the possibility of meeting new people through events they held. There really wasn’t another venue who provided all that iQ has to offer.

Do you think you would recommend iQ?

100%, to anyone who attends a university with an iQ in their city or town. It is the best place I have lived throughout my university experience and would recommend it to anyone who is looking. It works well for first years to final-years and even masters students. With all of the amenities that iQ offers there’s a community there with not just the other housemates or students around you but also with the amazing staff.

For me iQ was made home by the facilities and the people. Having access to a library space was inevitably the best facility for me, with my university having limited options. With so many students it meant there was rarely a seat available, therefore an onsite library made perfect sense. I didn’t have to go all the way to university, I could get my books after class and study where I knew there was a space for me. I felt like I could be myself at iQ – I could gym if I wanted to, I could be social in the social room if I wanted to and I could study if I wanted to, and having the option of all three really made me at ease.

The staff at the facility I couldn’t talk highly enough of, they ensured you felt safe and you could chat to them about anything from problems to your day. I really felt like I got to know them all. As well as the facility being amazing, feeling like home was made possible with the events iQ hosted where you can meet more people and make some amazing friends.

Every experience I had with the staff was great. From the night security team I spoke to after a shift at work finishing at 5am, to the maintenance team who fix any problem you have faster than you could hope for, to the day staff in the reception where you collect parcels and have coffee mornings. There’s not a standout experience because they were all wonderful. I couldn’t have asked for a more caring and jolly team of people to have the opportunity to see every day.

My favourite event has to be Pancake Day where iQ had arranged a pancake food truck to come. The pancakes came along with the most amazing toppings, and the couple who ran the truck were really lovely. Just standing chatting in the queue with other iQ students and staff was a blast, and obviously receiving delicious personalised pancakes was amazing. We took pictures with the van and the staff because it’s an event I want to remember. 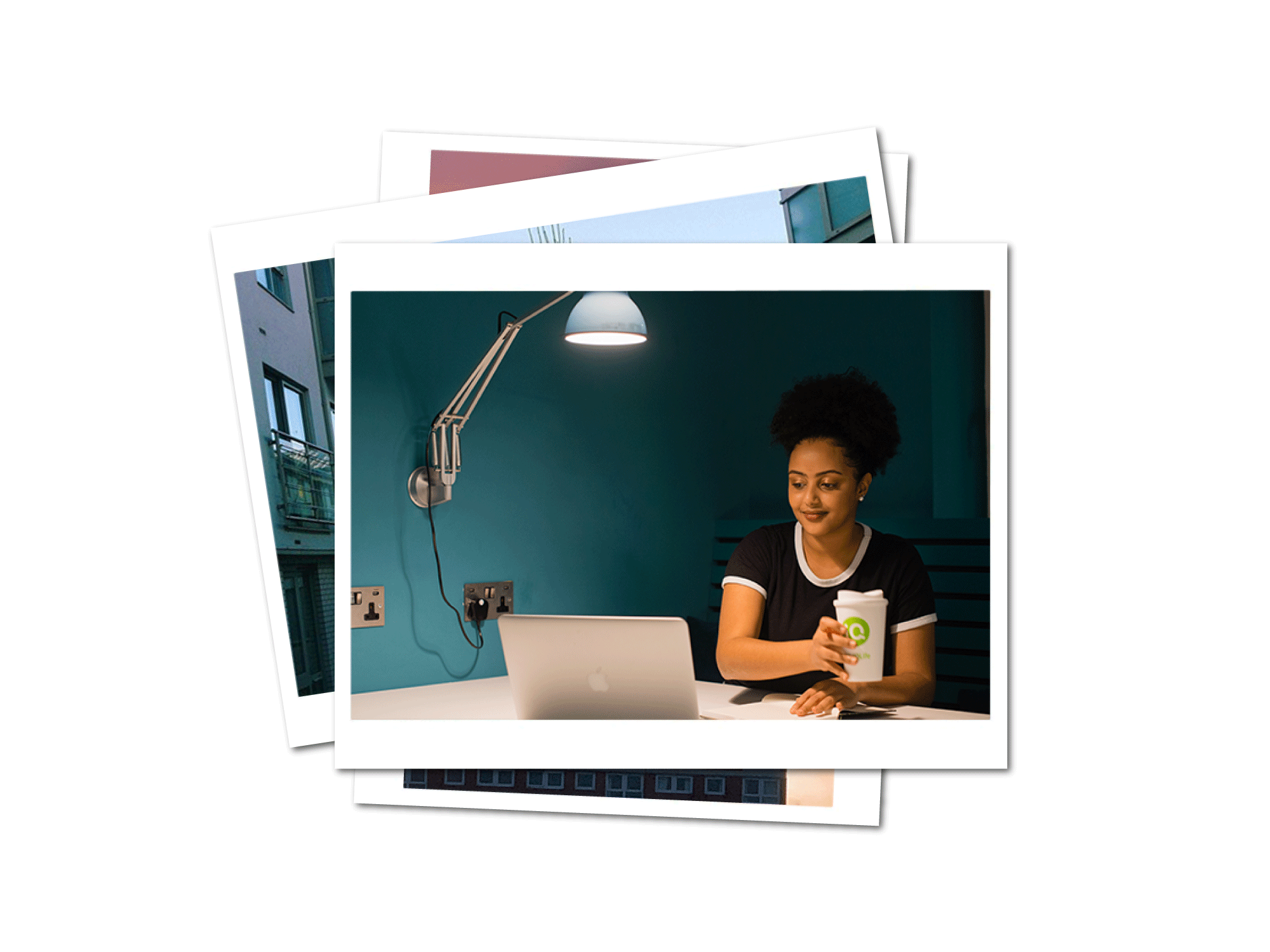 How to find your iQ home

1. Click the button below to head to our homepage. Once there, click the search bar to choose your city, university or iQ property.

2. Choose your room. Don't forget to copy the cashback code and enter it later on in the booking journey.

3. Fill in a few details and secure your room, with no booking fee to pay.